A brief history of smoking

It wasn’t really adopted for chewing and smoking until around 1000BC. Why people started using tobacco in the Americas no one knows, but it is thought the first users were the Mayan civilisation from where it gradually spread to Central America and on to the rest of the continent – North and South America.

In the early 1490’s one of Christopher Columbus’s chums Jerez, became the first European to take a puff – of a Cuban cigar. When he got home to Spain he continued the habit by lighting up in public, an act which the Spanish Inquisition took a dim view of, throwing him in jail for 3 years.

It’s a toss up between Captains Drake and Hawkins as to who first introduced tobacco to England, though it is thought the latter the more likely after 3 trips to the Caribbean in the late 1500’s.

Sir Walter Raleigh introduced tobacco to court circles also around that time. Not much later, the first consignment of tobacco arrived in England and, despite initial laws banning its use in ale houses, it flourished and continued to grow up to around 1945.

The clay pipe was obviously the pipe of it’s time and was around for centuries before briar pipes started to be produced. 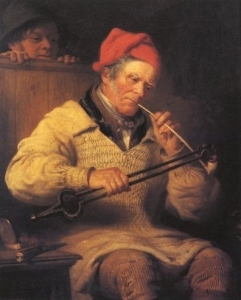 Thousands of clay pipes are always found whenever dredging takes place on the river Thames. The reason so I am told is that it was general practice in the 17th/18th century for gents to visit the taverns and inns that lay along the banks of the Thames on there way home from there day at work. Drink was consumed and the smaller clay pipes would be purchased when leaving. These clay pipes would be filled with either opium, cannabis or tobacco. On finishing the pipe it would be tossed into the Thames. The longer clay pipe was to be smoked in the tavern. It had small cuts down the stem, these were broken off when the smoker had finished allowing a clean tip for the next person.